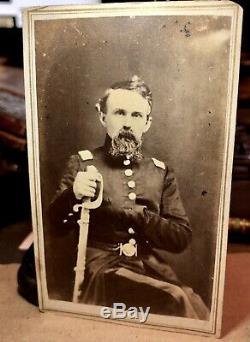 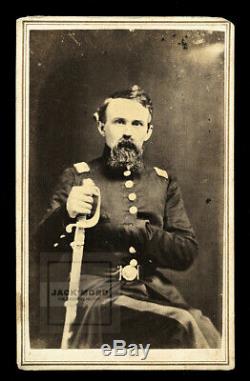 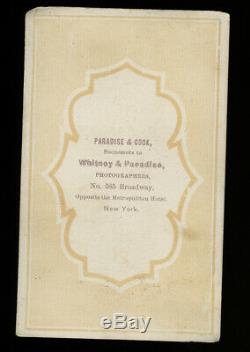 Original CDV of CSA Brig General George Pierce Doles, 4th Georgia Infantry. At the outbreak of the war he was Captain of a Georgia militia unit, "Baldwin's Blues".. I think this CDV could be of a daguerreotype showing him wearing that uniform, or possibly even early war.

A super rare, and probably one of a kind image in any case! CDV published by Paradise & Cook, New York. This CDV was originally inside of an album with several Civil War figures in it, including several other Georgia Confederates and a mix of both civilian and military with Georgia and New York backmarks. My guess is that the family who owned this album lived in New York and had Georgia connections; the original daguerreotype was probably in their possession, and they took it to P&C to have this CDV made of it.

Very good antique condition overall with light aging, stains, couple of rounded or slightly clipped top corner tips. The item "RARE One Of A Kind 1860s CDV Photo Georgia Civil War Confederate GENERAL DOLES" is in sale since Saturday, March 14, 2020. This item is in the category "Collectibles\Photographic Images\Vintage & Antique (Pre-1940)\CDVs". The seller is "jack_mord" and is located in Woodinville, Washington. This item can be shipped to United States.