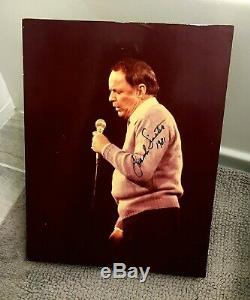 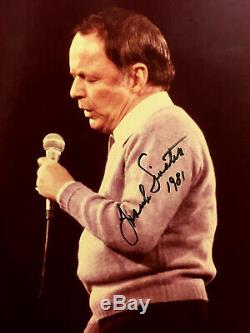 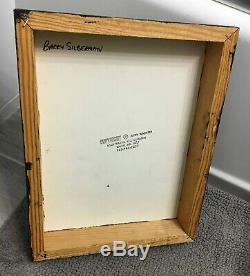 Hard to find authentic larger sized autographed photo of Frank Sinatra, with impeccable provenance. Was signed in 1981 by this 20th Century icon at the Capital Centre in the Washington D. Large format photo measures a hair under 11x14 in size. Sinatra for Barry Silberman, who ran Centre Management, which oversaw operation of the Capital Centre and other arenas back then. Sinatra used a black felt tip pen to place a solid autograph over his image which was taken on stage at a previous appearance there in April of 1974.

Exact date of the photo being signed by Frank would have been January 19, 1981, when he performed at the Capital Centre in Landover, Md. Photo is in very good shape overall; was neatly affixed to wood display for hanging purposes. Silberman's office wall for many years. Any advanced Sinatra collectors know authentic signed photos from the 1980's and after are EXTREMELY RARE........ 99% were signed by other employees of The Voice.

I will sell this puppy for a fair offer.......... This is guaranteed to be a genuine Frank Sinatra autographed photo, dating to 1981. A detailed letter of authenticity will accompany this unique large format signed piece.