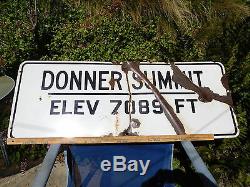 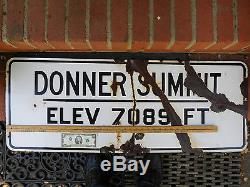 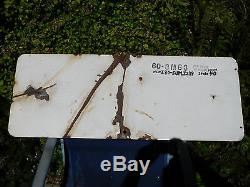 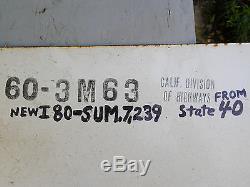 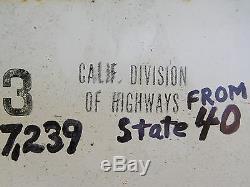 This sign is authentic and genuine, as you can see from the markings on the back side. I believe the number 60 dates it to the year 1960. I've been in possession of this sign since 1973 so I know it's at least more than 44 years old. And because I found it in the condition you see it, with the rusted areas, it must date back to 1960 which would make it 57 years old.

In 1973 I found this sign in a rental house in Novato, California, when somebody left it behind when they moved out. Or they just forgot about it. Because of its condition, it appears that either a snow removal machine or a semi truck ran it down and cracked the porcelain. The steel sign weighs 10 lbs, 6 oz.

Has porcelain on both sides, and measures 42" x 16". I'm guessing after the sign got bent that it was taken down and replaced with a new sign there on Calif State Highway 40 on Donner Summit.

So there are only 2 of these signs in the whole world--this one and the one that's at the summit of Donner Pass now. Collectible signs do not get any rarer than this. This sign is in that category.

For its transport I will be constructing a special box that will have this sign wrapped in plastic with a sheet of 1/4 plywood on each side. I say no to that! During the frontier history of the settling of the West, covered wagon trains had to carve their way thru the Sierra Mountains to get to the Pacific coast.

The Donner party of about 90 people from Springfield, Illinois was stranded in 1846 at over 7,000 feet high at the top of a pass in the Sierra mountains in California, during a brutal winter snow storm. They were trapped there in high snow drifts and winds with freezing temperatures until they could be rescued months later in the late spring of 1847. This was a horrifying story of starvation, murder, and cannibalism. The survivors only about 45 barely escaped with their lives. This history of the Donner Party ordeal played out just hundreds of yards away from where this sign once stood. The item "Donner Summit California highway road sign with elevation genuine one of a kind" is in sale since Tuesday, April 9, 2019. This item is in the category "Collectibles\Transportation\Signs".

The seller is "hdwings" and is located in San Anselmo, California. This item can be shipped to United States.