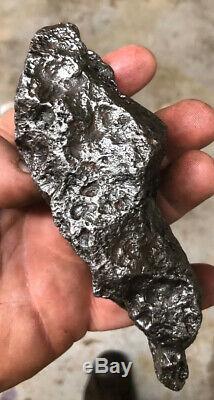 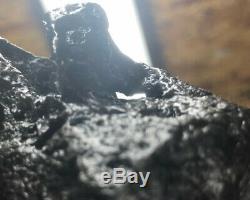 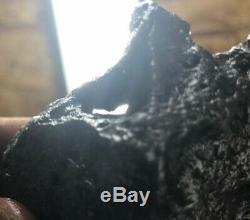 DIMENSIONS: 5.4 x 2.4 x 2 INCHES. THIS IS A ONE OF A KIND SHOW PIECE FROM MY OWN PERSONAL COLLECTION. NO ONE WILL HAVE ONE TO MATCH IT. VERY RARE METEORITE WITH A VERY LARGE BURN HOLE!

CAME FROM THE MY OWN COLLECTION, WAY BACK WHEN THESE MUSEUM GRADE METEORITES WERE AVAILABLE. A DISPLAY STAND WILL COME WITH THE METEORITE. MUSEUM GRADE ABSOLUTE BEST METEORITE GORGEOUS METEORITE!!! MUSEUM GRADE NEW CAMPO DEL CIELO METEORITE this is a must see meteorite!!!!

ORIGIN: NORTHERN ARGENTINA /FIRST FIND IN 1576 AD. QUALITY: MANY NICE LARGE REGMAGLYPTS AND SCOOPS WITH REMNANTS OF FUSION CRUST. GORGEOUS THUMBPRINTS ALL THE WAY AROUND THE METEORITE.

ENJOY THIS PIECE OF OUTER SPACE! VERY FEW OTHERS WILL HAVE ONE TO MATCH!! Certificate of authenticity and statement of history and chemical composition are furnished with every meteorite i sell. INTERNATIONAL CUSTOMERS MAY HAVE TO PAY A DUTY UPON RECEIPT OF THE ITEM. AMOUNTS VARY BY INDIVIDUAL COUNTRY.

· Time of Fall: 4,000 to 6,000 years ago History The first record of the Campo was in 1576. A Spanish governor learned of the iron from the Indians who reportedly believed that it had fallen from heaven.

The governor sent an expedition under the command of one Captain de Miraval who brought back a few pieces of a huge iron mass he called Meson de Fierro (large table of iron). The location of the find was the Campo del Cielo (field of the sky or heaven), a fitting name for the location of a meteorite. Since the Indians believed that the irons fell from heaven the name may have come from the meteorites. The area is an open brush-covered plain that has little water and no other rocks--very good country in which to locate meteorites. Structure of the Campo del Cielo The Campo del Cielo is described as a polycrystalline coarse octahedrite. At 3 mm the Widmanstatten bands are thicker than those at Canyon Diablo or Odessa, but still thin enough to have the same coarse octahedrite classification. The mass was composed of large austenite crystals from 5 to 50 cm in size. On break-up the fragments were cold worked like those at Sikhote-Alin and Gibeon.

Of course, almost all of the remaining portion of the meteorite is iron. The important minerals are: · Kamacite--this iron nickel alloy makes about 90 percent of specimens in finger size and width crystals. · Taenite and plessite, the other iron-nickel alloy constituents are found at grain boundaries.

· Troilite is found aggregates with graphite and silicates. PLEASE DO NOT ASK US TO CHANGE ANY VALUES.

The item "ONE OF A KIND CAMPO DEL CIELO METEORITE MUSEUM COLLECTION METEORITE W' HOLE" is in sale since Thursday, November 7, 2019. This item is in the category "Collectibles\Rocks, Fossils & Minerals\Meteorites & Tektites". The seller is "jlacroix1" and is located in Malone, New York. This item can be shipped worldwide.