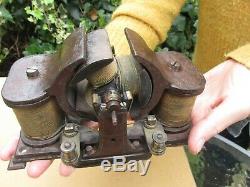 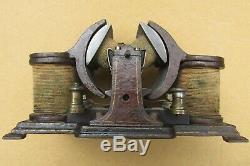 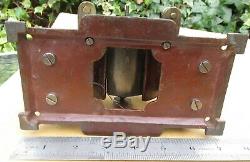 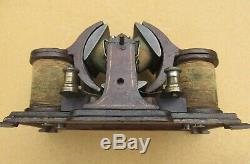 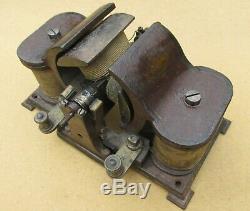 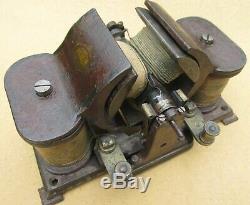 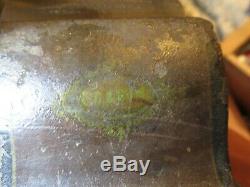 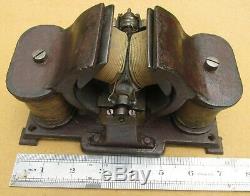 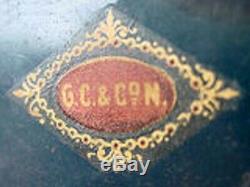 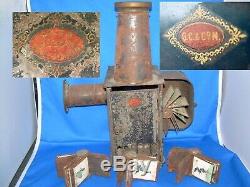 I have shown it next to a large Marklin boat in order to demonstrate what a good display piece it is. It may have flaws due to age - the logos can only just be read - but the video shows it working on a 12 volt DC power supply. I only really know Carette as a toy maker - so this muct have powered a pretty big toy.

Large Carette electric motor 1900. Video will open in a new window. Large Carette electric motor - about 7 inches long - 3 and 1/2 inches wide base. In a diamond of scrolls on both sides. (last picture but one above shows the logo as it appears on a magic lantern for comparison and the very last picture shows a Carette mutoscope from 1900 with a similarly worn mark - after about 1905 Carette started using a wheel with a steam governor in its logo - so for a short time - c1900 to 1905 this was the logo of Carette). More common are Tesla and Edison motors from this period. The carbon brushes are of an interesting design - being contoured and levered against the commutator rather than being kept in place by a spring. The small diameter of the spindle and large diameter of wire windings suggests this motor did not develop a large amount of torque for its mass and was of an early design. From a period when motor design changed rapidly so that this handsome and probably very expensive beast quickly became obsolete. But would have in its brief day (and still does), looked exceptionally elegant, both from a technological viewpoint and its'modern for 1900', art nouveau design - in its way, very similar in innovative modernity and rapid obsolescence in a period of burgeoning evolution of motors, to the hand cranked mutoscope of Carette - with the same period logo - shown in the last picture above and which likewise would have rapidly given way to moving pictures. The four square'claw' feet look to be purely aesthetic and indeed the design looks to be influenced by the'Aesthetic movement' of which Wenman Bassett Lowke was an important protagonist in the UK- advocating that the form of functional objects should also be pleasing to the eye. And this motor certainly meets that criterion. George Carette's toys also followed this ethos and were really works of art, incorporating features purely for aesthetic purpose such as the feet on the motor and curves of the cast framework. From the front the motor looks like a Buddhist temple temples which are also gold adorned like the copper pillars which are the electrical contacts - and the frame with its gold pin-striping - all supporting the rotor which is made to appear as a Celtic / Gothic revival triple spiral with.

Symbolism between two opposing crescent moons. (the Far East including Orientalism - being an important influence on the'Aesthetic movement' in Europe around 1900). It is almost as though the motion produced by electricity was venerated as though generated from religious belief - a miracle - and thus from form rather than the flow of electrons - which at the time would very much have been taken on faith, rather than any scientific understanding. (a motor literally like a mini church - to be seen with rather than inconspicuous).

George Carette was a pioneer of the use of electric motors in toy cars, boats and trains. Carette supplied Bassett Lowke with many of these. I think it therefore possible that this motor could have driven some of Bassett Lowke's larger boats - which they made large enough for people to sit in. I have a very large HMS Dreadnought from 1906 which would accommodate this motor although it is powered by 2 smaller Siemens motors - probably a little later design than this motor with more windings and purely funcyional.

It's nice to see it working again after maybe 110 years. I can't think of any other toy maker than Bassett Lowke who would have used a motor this big. I have shown it next to a large Marklin boat in order to demonstrate what a good display piece it is, and it does look good here with the continuity between the paddle wheel and the rotor, both in form and function play off of each other. The hand painted scrollwork detail on the name board of the boat is in fact also very similar in form to that in gold on the Carette logo. The motor is too nice a design -typically art nouveau -- and probably too expensive in the day - to be hidden below deck and would look nice powering an open launch. Its appearance would rival that of steam engines. It may have flaws due to age - the logos can only just be read - but the video shows it still working on a 12 volt DC power supply. Get images that make Supersized seem small. Tailor your auctions with Auctiva's. The item "One Of A Kind' Carette Germany 5kg electric motor antique c1900 tesla edison" is in sale since Thursday, September 3, 2020. This item is in the category "Toys & Games\Vintage & Classic Toys\Clockwork/Wind-Up". The seller is "greenergates" and is located in Stockport.