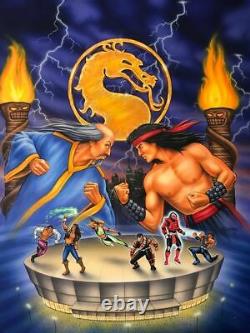 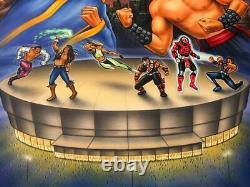 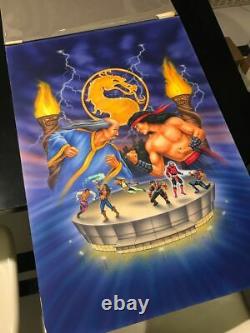 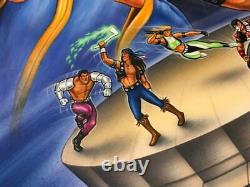 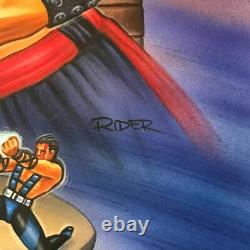 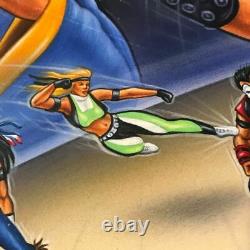 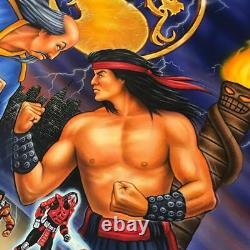 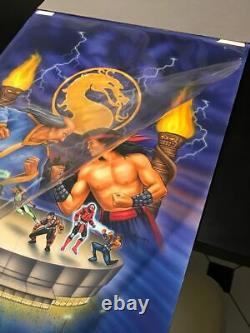 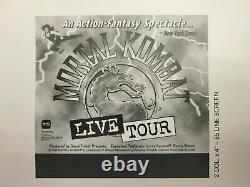 ONE OF A KIND RARE. ORIGINAL ART MORTAL KOMBAT 1995.

Own a piece of Mortal Kombat history! This magnificent original painting was used in the promotion of the Mortal Kombat Live Tour in 1995.

The Live Tour was a martial art theatrical show which debuted at Radio City Music Hall in New York City on September 14, 1995, followed by a 200 city road trip into 1996. This is an original piece of art, not a reproduction or printed poster. It measures a whopping 18.5" x 27", and is mounted to its original foamcore backing and has the original protective acetate overlay. It was art directed by the designer who produced the advertising for the Tour. And the painting (hand-painted in acrylic and airbrush) was done by Mike Rider, a renowned advertising illustrator.

Although the producers chose not to use this art in its full form for the show, this particular MK logo WAS used on the final advertising poster. The logo as shown was the first time the dragon was depicted in 3-dimension, its surface filled with chips and pockmarked. The layout of the painting was also designed to accommodate the MORTAL KOMBAT lettering in a semi-circle. (This was the first time that the typography appeared in that fashion).

The dark purple sky and lightning was also the inspiration for the art in the final poster. The painting has many of the famous MK fighters represented introduced in 1992 - Jax, Nightwolf, Sonya Blade, Kano, Sektor, and Sub Zero, fighting on a stage which is also the roof of a generic arena (reminiscent of Madison Square Garden) with attendees flocking to see the show.

It prominently features Shujinko (an early version concept sketch or a composite character) and Liu Kang in a fighting "showdown" stance, reminiscent of boxing matches. Two skull column torches flank the sides, and a New York City skyline including the landmark Chrysler building can be seen in the background.

This is a unique one-a-kind piece of art and only one in existence, with absolutely brilliant color, and can be framed and prominently displayed. Our mission goal is to make you, our customer, feel comfortable and satisfied with your experience here. We provide our customers with value through our discounted products, committing ourselves to providing the quality, variety and convenience you would expect. (Unless specified in description as Final Sale only) Any product you return must be in the same condition you received it and in the original packaging. Add my Shop to your favorites to receive newsletters about new items & special promotions! This item is in the category "Collectibles\Comic Books & Memorabilia\Original Comic Art". The seller is "e-wholesalersltd" and is located in this country: US. This item can be shipped to United States, Canada.