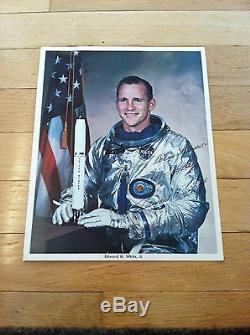 One-of-kind with incredible historical association signed original NASA issued 8x10 portrait litho (circa 1965) of the First American to walk in Space (as part of Gemini 4 in 1965) in his Silver Gemini Spacesuit , Ed White. Photo is in nice shape (no ugly unsightly major creases and only a couple of corner bends and displays beautifully).. Photo is signed / inscribed to the grandson of President Franklin D. Roosevelt, Delano Roosevelt all in the hand of Astronaut Ed White and superb...

Incredible Space and political/historical association! Ed White tragically died in the catastrophic fire during an Apollo 1 NASA test.. This is the very desired and quite rare original NASA issued Spacesuit portrait of Mr.

White and coveted by every serious Space collector! I authenticate Space and political autographs here in Washington, D.