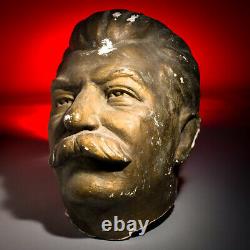 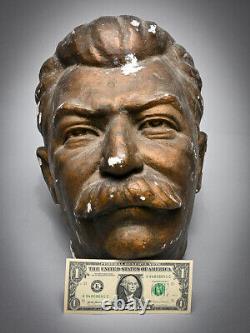 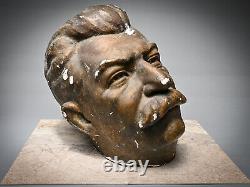 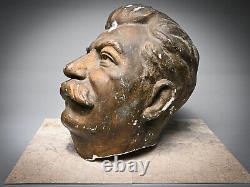 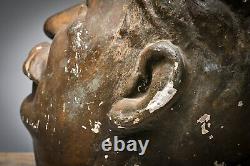 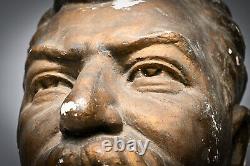 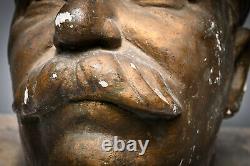 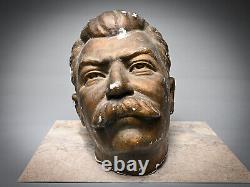 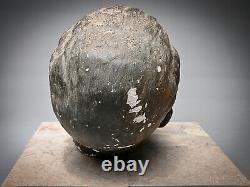 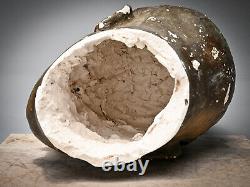 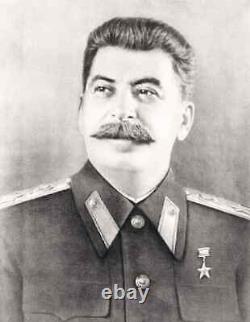 One-of-a-kind, GIANT Josef Stalin head from 1940-50's statue after the fall of the former Soviet Union! This is one IMPOSING head (approximately 16" tall from neck up, 10" wide from ear to ear and 13 deep from nose to back of head). This head once stood atop a larger-than-life statue of Josef Stalin. In plaster (see unknown sculptor's finger prints on inside of head). Head has several areas where the surface paint has been rubbed off. There is minor plaster loss on left ear (see photos). Head is almost 15-POUNDS in weight and as tough as a Siberian winter...

Small, cheap, mass-produced metal/plaster busts of Stalin are a dime a dozen... This sculpted head is truly UNIQUE! So, if you're shopping for that. This head came to me by way of the Ukraine. Considering some brave Ukrainian patriot beheaded a Stalin statue and it's lone head survived some 70+ years later, the overall condition and collectibility of this piece of history is truly OUTSTANDING!

Easily have it fully restored to it's former dark glory... Or keep'as-is' and use as a foot rest for your favorite Capitalist. As Stalin himself would have fittingly said: Keep your friends close, but keep your enemies closer.

Pawn Star shops seeking the'rare and unique. Unashamed capitalists, CEOs, or anyone who works in a corner office with a view.

Conservative politicians and proud Americans Mr. Homemakers looking for that special centerpiece to impress the bridge club. Statues of Stalin, the Soviet dictator who died in 1953 , quickly vanished across the empire he ruled. Stalin is a deeply divisive figure in Ukraine, which is sharply split between its nationalist west and pro-Russian supporters in the east who take a fonder view of the Soviet past.

Now there's no reason to let that special item pass you by!!! Feel free to ask any questions you may have. If you have any questions regarding this listed item, please feel free to contact me. Message me and I'll get back to you ASAP.

I'm saying'goodbye' to lots of cool stuff I've acquired over the years (sniff). But my loss is your gain! The item "UNIQUE, GIANT, ONE-OF-A-KIND Josef Stalin Statue Head from Ukraine 1940-50's" is in sale since Sunday, November 29, 2020. This item is in the category "Collectibles\Historical Memorabilia\Political\Rest of the World\Russia".

The seller is "tdhs1217" and is located in Los Angeles, California. This item can be shipped to United States.