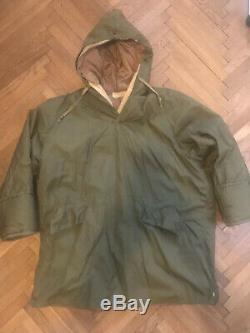 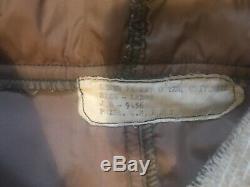 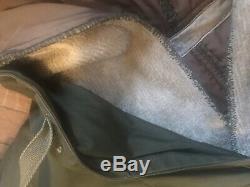 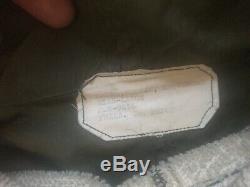 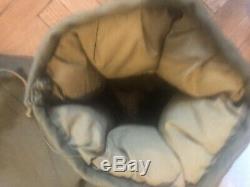 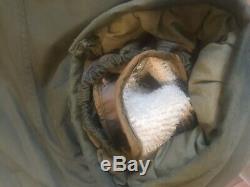 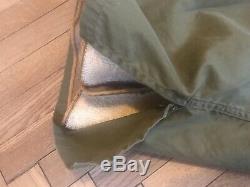 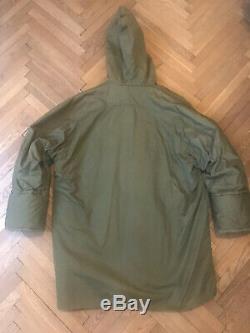 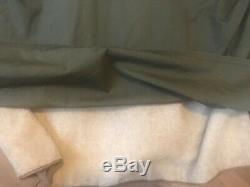 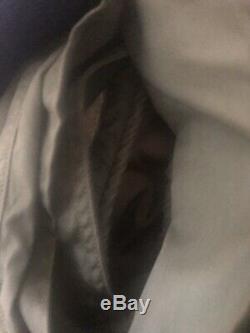 10th mountain division parka experimental protoype. Versand mit Deutsche Post Brief Standard. This fantastic Experimental Prototype 10th Division Mountain troop parka, complete with its original experimental Prototype liner. Dated to between 1944 and 1949 this parka was one of a very rare few parkas that were being developed for the elite 10th Division mountain troops to fight and to train infantrymen in extreme cold weather of the mountain warfare theatre. The listing is for an original and complete experimental prototype parka set of shell and liner in mint NOS condition.

The Shell This shell is totally mint and in NOS condition, no stains tears mark or repairs. The shell is made of the same experimental lightweight poplin/Nylon material as the prototype EX-48 Fishtail Parkas that were being made around the same time in 1947 and 1948.

As such it is super lightweight and extremely advanced for its time. The cuffs are deep quilted with what i believe to be feather down inside them and they also have an elasticated cuff liner insert sewn in (pictured), They are unlike any cuffs i have ever seen. The elastic in these inserts is in fantastic condition and is still like new, nice and stretchy and forms a good seal around the wrist when worn, which wold be crucial in these harsh mountain environments. The Parka has five good sized pockets in it, one large one across the chest and two lower slash pockets that contain both a pocket and also an access slash to the inner liner. Which houses two more breast pockets. Its a really clever design, with the flaps keeping the wind out. The hood houses three snap connectors that the liner hood clips onto, all three snaps are perfect mint condition The hood also has an original drawstring that goes through it to tighten the hood and make a good seal and again this is mint. Lastly in the neck of the shell there is the original spec label showing it to be a QM military prototype and labelled as QM job number 9456.

Both the shell and liner have matching spec labels and both are pictured. My guess is, with the amount of work involved in this shell it would have been way too expensive to mass produce, so it may well be the only one of its kind. The QM military spec label in it clearly says it is Large sized. The Liner For me the liner is certainly as interesting as the shell and very unusual indeed.

Like the shell, this liner is also in totally mint condition throughout. Firstly it is made of the same Freize material as used in the M51 field jackets and parkas made sligtly later in the early 1950s, this was clearly one of the first military jackets ive seen tested using this material. It is lined with an early nylon type material on its reverse side, not the later poor quality ripstop type which again appeared from 1952 onwards. This is real US military QM quality throughout. It has two slash type entry points in the bottom front pockets for access to the two inner breast pockets that it has located on the chest of the inside of the liner, these are pictured and are a really clever design and again something ive never seen before in one of these parkas, it clearly was radical thinking on these prototypes. The liner has the three snap connectors on its hood to connect it to the hood of the shell and also has all the very distinctive characteristics of later production liners that were used in field jackets and parkas in the very early 1950s and also the 1947 dated M-1947 parka which also used these snap connectors in the liner. Both the "white side" frieze wool pile and the nylon side are totally unmarked and in mint condition, the pictures tell the story really, it is a really special parka.

It also has two single button loops in each of the liner cuffs (one in each sleeve cuff) to retain the sleeve neatly in the shell when slipping the parka on and off, these attach to a single m43 type button that is sewn into each of the cuffs on the shell. The single button loop in each sleeve is exactly the same in the EX-48 and M-48 parkas of the late 1940s. Dual button loops were only introduced from 1951 in the M-1951 parka sleeves to prevent the sleeve twist that could occur in a single buttoned cuff. These button loops have exactly the same appearance as the WW2 M1943 parka cuff button loops ive seen in a couple of other M43 based experimental parka liners and are made of the same material as these cuff button loops. The liner has an identical US military QM Spec label in the neck as the shell, pictured and it also states that this was "Job 9456" so clearly it was a prototype experimental parka and that was the specific job number for this prototype.

But again when i look at the brilliantly complex and detailed workmanship in the liner i can see why, because as wonderful as it must have been for the lucky soldier testing it, it clearly would have been way too expensive to mass produce and so never made it into production (sadly for the troops). This really is a fantastic parka.

Summary Here we have probably the only Prototype mountain parka of its type you will ever see for sale, a genuine prototype mountain division parka from the late 1940s. It is in mint condition and unmarked and in a very wearable size Large. To say this is a rare piece is an understament and this really is an opportunity to own a piece of US mountain troop prototype parka history i will guarantee that no one else will have and certainly not in this pristine condition. (i do expect it to sell to a committed collector) Should anyone want to see any further pictures, just ask, as i have plenty on file.

Clearly vintage parkas are not made for fitting any individual person and i sell it as a collectors piece of the sizes listed below, as such it is bought on that understanding it is these sizes clearly listed. Here are the exact complete measrments taken with the parka laid flat with the liner in. Lastly good luck guys - treat yourself to somthing special, because you really are worth it and gems like this do not appear for sale often.

IDescrition courtesy of The Undertoker. The item "10th mountain division parka experimental protoype WW2 One Of A Kind" is in sale since Wednesday, January 1, 2020.

This item is in the category "Sammeln & Seltenes\Militaria\Ab 1945\USA\Uniformen & Effekten". The seller is "lightiscomin" and is located in Berlin. This item can be shipped worldwide.