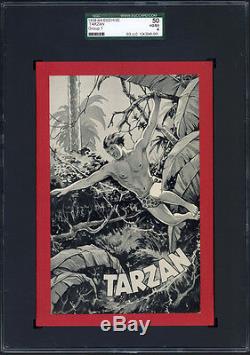 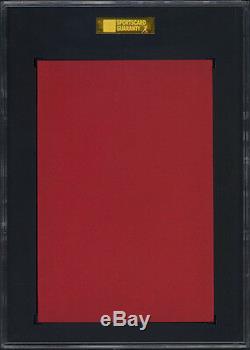 1934-44 Beehive Group 1 -- Tarzan -- SGC 50 One of the rarest Beehives known. The king of all Beehives, this example was ordered within the first week of the promotion by the original owner and is the only one known to still exist. That collector traded it to Peter Kolaski, who came to possess one of the finest Beehive collections in the world after accumulating them for more than 75 years. We were fortunate to obtain it from Peter Kolaski some years ago. The mount is original and the glue pattern perfectly matches all known group 1 Beehives.

The surface of the photo has a nice glossy sheen with a slight crazing, typical of 1930s era photo stock. Lawrence Starch (the producers of Beehives) sent this photo very early in the promotion, long before the company was swamped with orders -- during a time when the Tarzan phenomenon was extremely popular. In fact, it was only two years earlier (1932) that Johnny Weissmueller starred in the big-screen production, Tarzan the Ape Man. " SGC has authenticated this Beehive and assigned a grade of "Very Good to Excellent condition superb for a Group 1 mount.

The photo itself is in Excellent to Mint condition and features the "Lord of the Jungle" swinging through the foliage. While there are other nonsport issues distributed with Group 1 Beehive mounts, this is the only known nonsport example which does not appear on any checklist and has never been cataloged. The item "1934-44 Beehive Group I Tarzan SGC 50 - One-of-a-kind" is in sale since Saturday, December 29, 2012.

This item is in the category "Collectibles\Non-Sport Trading Cards\Vintage Non-Sport Cards". The seller is "bmw_cards2" and is located in Madison, Wisconsin.