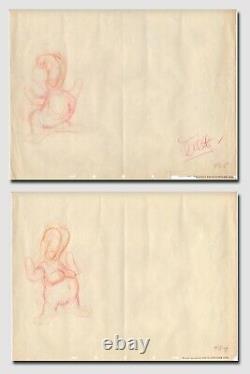 Walter Elias "Walt" Disney - American business magnate, animator, cartoonist, producer, director, screenwriter, philanthropist and voice actor. As a major figure within the American animation industry and throughout the world, he is regarded as a cultural icon, known for his influence and contributions to the field of entertainment during the 20th century. One of a kind drawing signed Walt.

Disney approves a drawing by one of its artists. Two drawings of Clara Cluck, one is signed by Disney in red colored crayon and additionally with a check mark from Disney. The pages are numbered 485 and 489 at the bottom right corner in pencil. Clara Cluck was usually the nervous, opera-singing hen in many of the Disney shorts of the 1930's. COMES WITH A CERTIFICATE OF AUTHENTICITY BY ANDREAS WIEMER HISTORICAL AUTOGRAPHS. Please do not hesitate to contact me with any questions.

I started collecting autographs of famous personalities as a teenager in 1985. During the last ten years Im specialized in the autographs of History and Presidents of the United States. My large reference library includes all the standard works with more than 100 books on the subject. Im a member of all major autograph organizations and the author of several published articles and reference books incl. The standard works: John F.

Kennedy autograph study and Presidents of the United States AUTOPEN GUIDE. The item "Disney, Walt (1901-1966) One of a kind signed Clara Cluck drawing" is in sale since Monday, May 10, 2021. This item is in the category "Collectibles\Autographs\Celebrities". The seller is "autographs26771" and is located in Kelkheim.