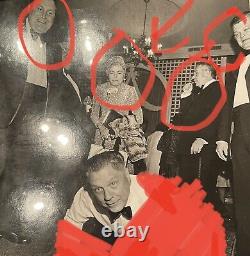 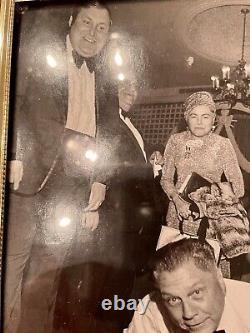 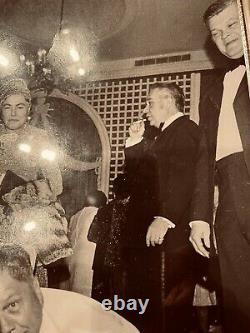 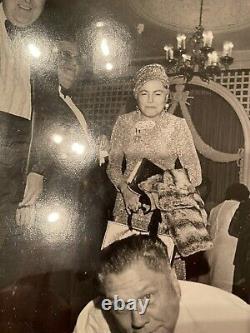 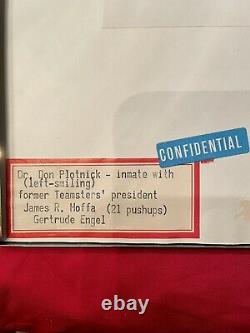 Rare - one of a kind photo of Jimmy Hoffa asked to perform sit ups during special event. Make an Offer Today and Get a Quick Response! You will not find such a pose of Jimmy Hoffa anywhere; which explains our asking price. Picture was arranged by Gertrude Engel who is wearing a hat in the picture. At the time she was unaware that Jimmy Hoffa was task to perform Push ups for a bet.

In this picture with Gertrude captures a rare picture of Dr. Don Plotnick - Left smiling. Others have not been identified. Only the FBI would be able to share if inquiries are made directly to them. Brief Background on Jimmy Hoffa.

The union leader with ties to the mob inscribes this photo to an admirer. His ties with organized crime. Both before and during his tenure as.

President of the International Brotherhood of Teamsters. (from 1957 to 1964, when he was convicted of attempted bribery and sentenced to 15 years in prison).

On December 23, 1971, Hoffa was released after. President Richard Nixon commuted his sentence on the condition that Hoffa not participate in union activities for ten years. On July 30, 1975, as Hoffa was planning to meet with two Mafia leaders (Anthony "Tony Jack" Giacalone and Anthony "Tony Pro" Provenzano). From the parking lot of the Machus Red Fox Restaurant in Bloomfield Hills, Michigan. Although Hoffa's body has never been found.

He was presumed dead - a victim of a mob "hit". Although numerous investigations have failed to establish the circumstances of Hoffa's death. Is guaranteed that this is one of a kind and original.

There is no other copy that exist. Black and White 8x12 in excellent shape considering photo was secured in a secret location for. This item is in the category "Collectibles\Historical Memorabilia\Other Historical Memorabilia". The seller is "psahos1" and is located in this country: US.