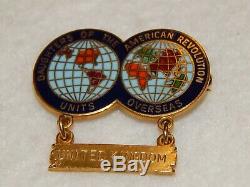 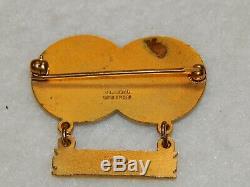 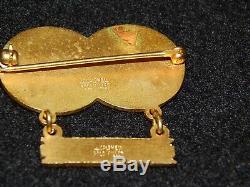 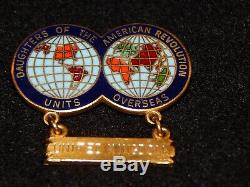 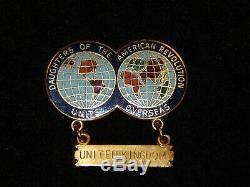 For your consideration, this is a rare, one of a kind DAR pin depicting the UNITS OVERSEAS. This one is complete with bales and a bar engraved UNITED KINGOM. This is a vintage pin, fully intact. The pin measures 1 1/4" wide and 3/4" tall. The attached bar measures 7/8" long and is just shy of 1/4" wide.

This pin depicts the world in a flat 2 globed format with latitude and longitude lines, surrounded by a black border that reads'DAUGHTERS OF THE AMERICAN REVOLUTION UNITS OVERSEAS The gold bar is machine engraved in capital letters and reads UNITED KINGDOM. Mark shown on back or right globe has been removed and additional photo will be posted later this week. JE Caldwell was a Philadelphia PA jeweler established in 1839 and for many years was one of the few companies commissioned by the Daughters of the American Revolution to produce commemorative pins for the organization. They have since closed their doors. These pins are now commissioned by Hamilton Insignia, one of the only remaining companies authorized to produce DAR pins. It is important to note that the gold filled pins produced by Hamilton Insignia do not have a ribbon bar. If you, a friend or a member of your family is a member of the DAR in the United Kingdom, this would make a lovely addition to a DAR sash. Being that this was commissioned by JE Caldwell, it probably was from a collection that was worn between WWI and WWII. This is a highly desirable pin that will make an exceptional and. Memorable gift that will be treasured for years to come. This is one of the few pins that I will offer on an International listing. As always, a portion of all DAR sales are donated to the Westmoreland County Chapter of the Daughters of the American Revolution to off set the cost of their on going preservation projects. Due to the delicate nature of this item, it will be packed in a manner to assure it arrives at your address in the same condition that it left mine. Thanks for visiting this posting. Please save VINTAGE-N-VOGUE in your favorites for future postings of RARE, HARD TO FIND & RETIRED DAR merchandise. The item "RARE DAR UNITS OVERSEAS UNITED KINGDOM JE Caldwell Gold Filled One of a Kind" is in sale since Wednesday, August 28, 2019. This item is in the category "Collectibles\Historical Memorabilia\Fraternal Organizations\Daughters of Amer.