Vintage Disneyland Mural-Peter Pan, Hook and Wendy-One of a kind. From the Park 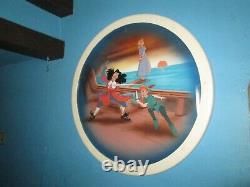 This outstanding and rare one of a kind hand painted piece of artwork was obtained from Disneyland Park during a remodeling phase over 30 years ago.. It once was displayed in the entrance to the Peter Pan ride.. Painted by Disney artists on wood and custom framed, it is just under 4 feet diameter and is a great wall display.

This is NOT a lithograph or print of any kind... Painted directly on board with plexiglass facing added for my display.

In 1983, Disneyland's Fantasyland was in a phase of major overhaul. Some of Fantasyland's rides were relocated to make way for expanded versions of existing dark rides, as well as the addition of a new one. The posh redo of Fantasyland now resembled a rustic European village in the Alps, rather than a medieval fair. Snow White's Scary Adventures. Moved their respective loading areas and partial murals indoors.

Looks great on the wall of your Disney Collector's Room. The item "Vintage Disneyland Mural-Peter Pan, Hook and Wendy-One of a kind. From the Park" is in sale since Thursday, September 24, 2020.

This item is in the category "Collectibles\Disneyana\Contemporary (1968-Now)\Limited Editions". The seller is "tomkellyarchives" and is located in Saint Louis, Missouri. This item can be shipped worldwide.