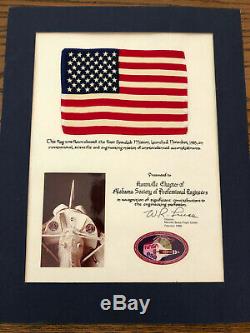 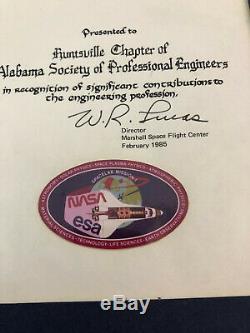 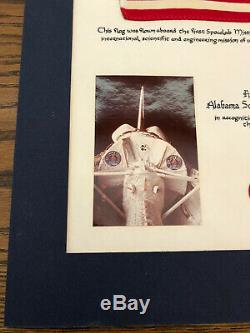 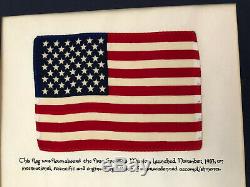 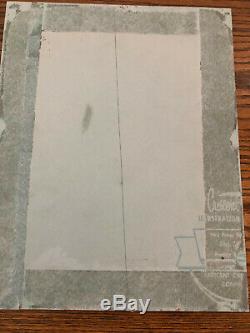 1983 NASA STS-9 First Spacelab US American Flag Flown in Space signed by NASA MSFC Center Director Awesome rare, one-of-a-kind collectible from the NASA Marshall Space Flight Center Director to the ASPE Huntsville Chapter in recognition of significant contributions to the engineering profession. Many of the members of the Huntsville ASPE worked at NASA during the Shuttle Program. The 5-3/4" x 4" United States Flag was flown aboard Columbia during the STS-9 Spacelab mission from Nov 28 - Dec 8, 1983, that included two former Apollo Astronauts: Commander John Young (Gemini 3, 10, Apollo 10 and 16) and Mission Specialist Owen Garriott (Skylab 3). The certificate was presented to the Huntsville Chapter of the Alabama Society of Professional Engineers by then MSFC Director, Wayne Lucas, in February 1985. It is hand-signed by W.

It was framed and hanging at the ASPE office in Huntsville. The frame was broken so it was removed. The finished and matted certificate is 11" x 14" and is ready for a new frame. This is literally the only one of its kind.

The Spacelab cargo color photograph is a glossy photo as is the NASA ESA Logo and they are attached to the certificate. There is some light tanning of the white US flag stripes as shown. From a clean and smoke-free home. The item "1983 NASA STS-9 First Spacelab US American Flag Flown in Space - One of a Kind" is in sale since Saturday, July 6, 2019.

This item is in the category "Collectibles\Historical Memorabilia\Astronauts & Space Travel\NASA Program". The seller is "jclwriter" and is located in Owens Cross Roads, Alabama. This item can be shipped worldwide.