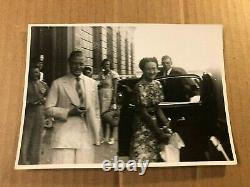 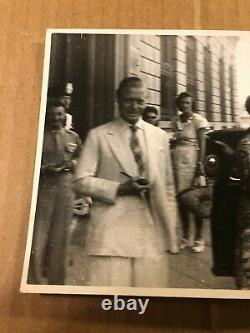 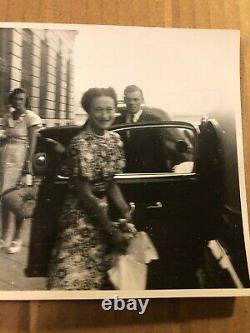 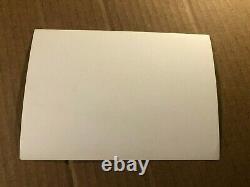 Here is a one of a kind candid 5" by 7" photo of King Edward VIII and Wallis Simpson from the 1930s. Edward VIII (Edward Albert Christian George Andrew Patrick David; 23 June 1894 28 May 1972) was King of the United Kingdom and the Dominions of the British Empire and Emperor of India from 20 January 1936 until his abdication in December of the same year. Edward was born during the reign of his great-grandmother Queen Victoria as the eldest child of the Duke and Duchess of York, later King George V and Queen Mary. He was created Prince of Wales on his 16th birthday, seven weeks after his father succeeded as king. As a young man, Edward served in the British Army during the First World War and undertook several overseas tours on behalf of his father. While Prince of Wales, he engaged in a series of sexual affairs that worried both his father and then-British prime minister Stanley Baldwin. Edward became king on his father's death.

As king, he showed impatience with court protocol, and caused concern among politicians by his apparent disregard for established constitutional conventions. Only months into his reign, a constitutional crisis was caused by his proposal to marry Wallis Simpson, an American who had divorced her first husband and was seeking a divorce from her second. The prime ministers of the United Kingdom and the Dominions opposed the marriage, arguing a divorced woman with two living ex-husbands was politically and socially unacceptable as a prospective queen consort.

Additionally, such a marriage would have conflicted with Edward's status as titular head of the Church of England, which, at the time, disapproved of remarriage after divorce if a former spouse was still alive. Edward knew the Baldwin government would resign if the marriage went ahead, which could have forced a general election and would have ruined his status as a politically neutral constitutional monarch. When it became apparent he could not marry Wallis and remain on the throne, he abdicated. He was succeeded by his younger brother, George VI. With a reign of 326 days, Edward is the shortest-reigning monarch of the United Kingdom. After his abdication, Edward was created Duke of Windsor.

He married Wallis in France on 3 June 1937, after her second divorce became final. Later that year, the couple toured Nazi Germany. During the Second World War, Edward was at first stationed with the British Military Mission to France, but after private accusations that he was a Nazi sympathiser, he was appointed Governor of the Bahamas. After the war, Edward spent the rest of his life in France.

He and Wallis remained married until his death in 1972. Wallis died 14 years later. The item "King Edward VIII & Wallis Simpson One of a Kind Candid Photo 30s Abdication" is in sale since Sunday, July 25, 2021. This item is in the category "Collectibles\Historical Memorabilia\Royalty Collectibles".