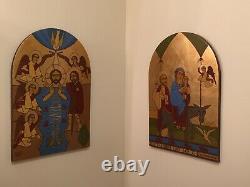 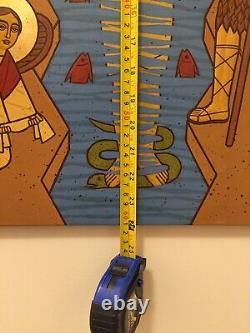 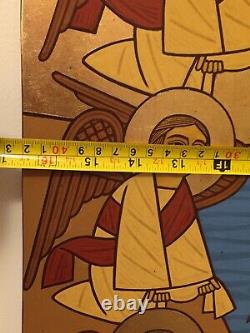 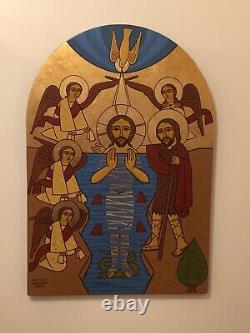 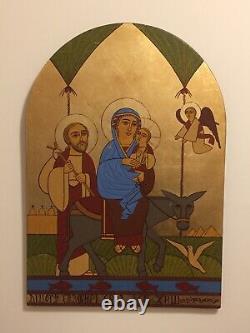 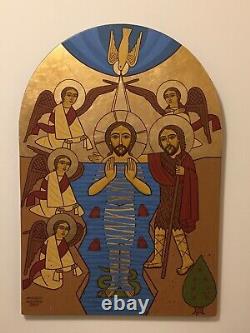 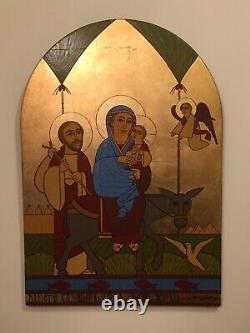 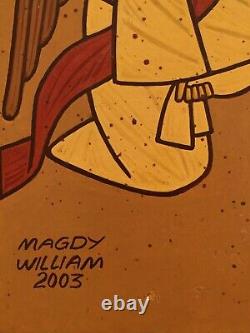 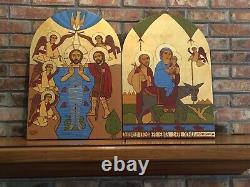 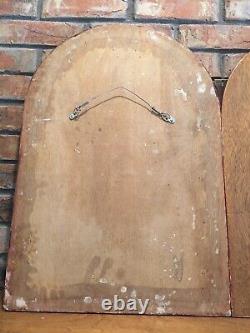 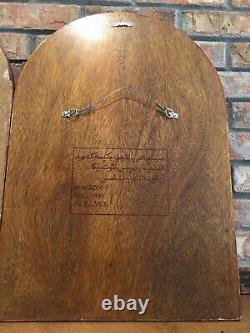 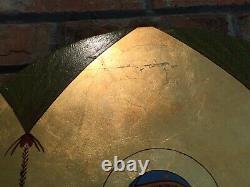 The substrate looks like oak maybe? Condition is very good vintage. There is a slight blemish in the gold leaf on the Mary painting as seen in the photos. Its a relatively easy repair. Here is an article and link about William...

I havent read the entire article but it looks informative.. Magdy William is one of the worlds premier Coptic iconographers, having studied under the renowned reviver of the long neglected art, Isaac Fanous. William discussed his craft, its history, and spiritual impact during an exhibition hosted by St. Johns Episcopal Church in Maadi, Cairo, on October 21, 2011, under the sponsorship of Rev. Jessica Wright served as curator for over fifty commissioned pieces, and provided translation for Williams presentation, entitled The Making of Coptic Icons. The event was part of The Eternal Eye, an exhibition desiring a new Egyptian society, which honors all its religious diversity. Bishop Daniel, bishop of Maadi and assistant to His Holiness Shenouda III, pope of the Coptic Orthodox Church, opened the event. Chandler, Bishop Daniel, and Magdy William. There is a direct connection, William states, between Coptic icons indeed all icons and the artistic heritage of Egyptian Pharaohs. When a Pharaoh died, his portrait was drawn and placed on his sarcophagus to lead his spirit back to his body at the resurrection. The portrait was idealized, imagining his appearance at age 25 the prime of life, but intended to be faithful in representation. So also do Coptic icons not seek to be a realistic picture of a saint, but to convey his spiritual reality to both teach and impact the viewer. Production of icons also mirrors its Pharaonic history. Only natural pigments are employed, to preserve color for thousands of years as witnessed in the pyramids and royal tombs. William first prepares a piece of wood to use as the base, covering it with gelatin and then a cotton cloth. After an initial twenty-four hours he removes the cloth along with any excess, and reapplies the hot gelatin mixture. He repeats this process ten times over five days to smooth it properly for application.

Thereafter William applies a thin gold leaf over the wood, and adds first the darker colors. To this broad lines are added shaping the landscape for where lighter colors are added. A black outline then completes the picture to highlight distinction, and a final varnish covers the icon for preservation.

It is a detailed process, and William is a perfectionist. Photo: Jessica Wright, curator and translator. Early Christians in Egypt, like elsewhere, often worshipped in tombs, caves, or secret places, but drew their holy images upon the walls. Icons developed, at least in part, as a way to make their images mobile should their worship locations be discovered. Demonstrating continuity of culture, Egyptian Christians imitated the style and production of their heritage, and exported the use of icons throughout the Christian world.

This process came to an abrupt halt after the 6th Century when icons came under fire as idolatry, and many were burned as the art declined in Egypt. Elsewhere, however, Christian emperors became great sponsors of iconography, as Byzantium and Russia developed their own distinct styles.

Yet except for a revival during the Fatimid period, Egyptian iconography stagnated until the 18th Century. During this time Egypt produced only poor quality icons, as local rulers and patrons sponsored art and architecture from within their religious traditions, drawing the best artists away from the church.

Seeking to outfit their community the Coptic Orthodox Church recruited Armenian iconographers, who produced worthy material on Egyptian soil. This arrangement continued until 1965, when Pope Cyril sent Isaac Fanous to study iconography from a Russian living in Paris. He received a PhD, as well as a blessing from the Russian, who told him we received this tradition from you, and now we give it back. Returning to Egypt, Fanous revived indigenous Egyptian iconography, founding the neo-Coptic school, which William joined in 1986.

At the time William was an artist of a different sort; he created the templates for promotional movie posters, which were then mass distributed. He credits his wife for helping him turn to art of a more spiritual variety, which he called a transformation. William was keen to impress that Copts do not worship their icons, which serve to remind of the person or event depicted. It is a lesson, recalling Biblical tales or stories of the saints, which among millions of illiterate Egyptians impart the values and knowledge of divine history. But it is more than a lesson; it is communion.

Copts believe the spirits of the saints are present in prayer, drawing the believer into a wider fellowship. This is one reason icons are prominent in Orthodox churches, and many Copts set up a prayer corner with an icon in their homes. Stories abound as well of the intercession of the saints being multiplied as an icon is contemplated, resulting in miracles of healing or fertility.

Some icons are celebrated as having cried tears, which drip from their painted eyes. Such miracles happen around the world, not just in Egypt, William asserts, and is due to the choice of God, having nothing to do with the skill of the iconographer. An exhibition attendee, contemplating an icon of St. Today, many in the Western Christian world have turned their eye to the East, seeking additional sources of spirituality which ring with authenticity and history in a material and disjointed age. Stories of miracles may cause these sons of the Enlightenment to pause, but for Copts they are simply the continuation of the faith, for which God has worked miracles through his saints throughout the ages.

Regardless, the continuity of history is source of great comfort for Copts, especially in this current age, as Egypt and Egyptian Christians are facing an unknown future. Many fear the worst, worrying that sectarianism, even persecution, could be on the horizon.

If so, icons are a worthy reminder of Gods ultimate triumph. Mina, and even Jesus, but martyrs of earlier ages? Yet their icons are serene, reflecting the idealized portrait of their eternal restoration. The Coptic Orthodox Church is a martyrs church, from whose blood the seed of faith has sprouted.

If Copts today fear, then a greater contemplation of their artistic heritage is recommended. Icons are a tool to aid in connecting with the divine, and divine comfort and rebuke vary from age to age and from person to person. Magdy William is only one in a long chain of men who assist others in their path to God. Though his rendition of each saint varies slightly from the next, the eternal eye binds them as humanity, universalizing the individual, placing him in the divine story and spiritual reality of God. Gods means are many, yet the icon is there for all who wish to enter in.

The item "One Of A Kind Coptic Christian Diptych Wood Painting Hand Painted Magdy William" is in sale since Wednesday, January 13, 2021. This item is in the category "Collectibles\Religion & Spirituality\Christianity\Icons". The seller is "leeparker" and is located in New York, New York. This item can be shipped to United States.