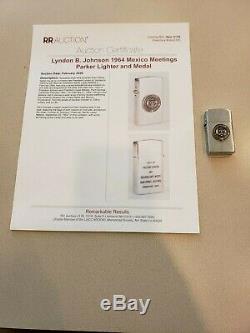 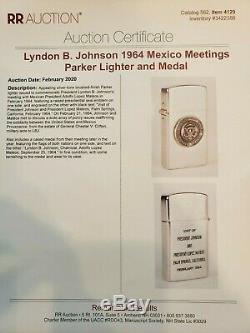 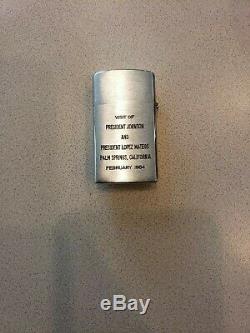 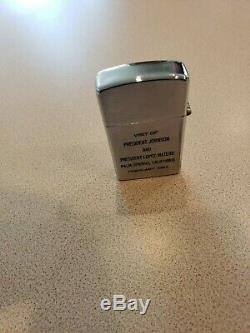 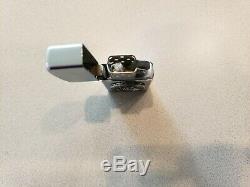 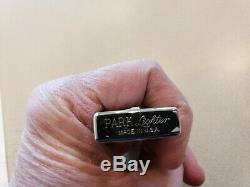 Personal Gift from President Lyndon B. Johnson only two months or so after assuming the Presidency following the tragic Assassination of President John F. Kennedy on November 22, 1963.

Item is a rare special Presidential Gift Lighter made by Parker with one side commemorating the occasion of the First Head of State meeting between President Lyndon Johnson and the President of Mexico, Lopez Mateos, February of 1964 and the other side has a raised die cast Bronze Seal of the President. Lighter is of brushed silver tone and superb unused and unlit condition (all as seen) and looks amazing. This is a very rare Presidential lighter (it appears less than 50 were made by Parker) made for this historic meeting for President Johnson to give personally to VIPs (including one that was given to President Mateos himself by LBJ). This one offered here was personally given by LBJ to General Chester "Ted" Clifton and was part of his personal estate. You can GOOGLE General Chester Clifton for more info. He served as the Chief Military advisor for President John F.

Kennedy starting in 1961 and President Lyndon Johnson and retired from Military service in 1965. He was directly involved in the Cuban Missile Crisis and was in the motorcade in Dallas on the tragic day President Kennedy was assassinated.

Item comes with a copy of a R&R COA attesting to the provenance of this historic rare Presidential personal gift. Note this sale is for the rare Presidential gift lighter mentioned from this R&R sale and not the additional medal mentioned in that COA. A certain one of kind personal item with a JFK and LBJ connection and would make a superb addition to the serious Presidential collector. The item "ONE-OF-KIND 1964 Gift Lighter to General Clifton President Kennedy & Johnson" is in sale since Thursday, March 5, 2020. This item is in the category "Collectibles\Historical Memorabilia\Political\US\Presidents & First Ladies".